Maybe Children are Not Overmedicated 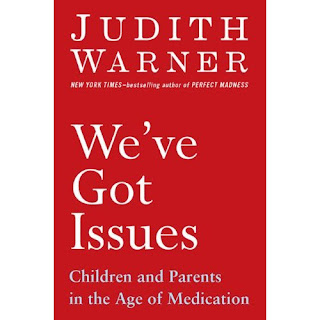 Judith Warner, former columnist for the New York Times, has just released a new book "We've Got Issues: Children and Parents in the Age of Medication." She started out writing the book convinced that today's children were frequently misdiagnosed and overmedicated for mental health problems. As noted in Abigail Zuger's review, Warner "sallied forth to interview all the pushy parents, irresponsible doctors and overmedicated children she could find — and lo, she could barely find any."

I haven't read the book but I plan to. Parents who agonize over medication for their child for serious, chronic, psychiatric conditions may want to as well. And those who have gone ahead with medication despite their misgivings may find comfort in the stories of other families in the book.

As for Ms. Warner, she became convinced that the stereotype of the overmedicated child is a myth:


A couple of simple truths have become clear...that the suffering of children with mental health issues (and their parents) is very real. That almost no parent takes the issue of psychiatric diagnosis lightly or rushes to ‘drug’ his or her child; and that responsible child psychiatrists don’t, either. And that many children’s lives are essentially saved by medication, particularly when it’s combined with evidence-based forms of therapy.

Read the full review at Books - “We’ve Got Issues,” by Judith Warner - Review - NYTimes.com
Email ThisBlogThis!Share to TwitterShare to FacebookShare to Pinterest